Matt Morsia is a 33-year-old YouTube Fitness star whose popularity has shot through the roof with his latest video with fellow YouTuber, Mike Thurston.

This video shows Matt and Mike trying to see if their fitness is on par with the US Marine Corps Fitness Test standards. The video has gone viral with over 350K views in just one day. 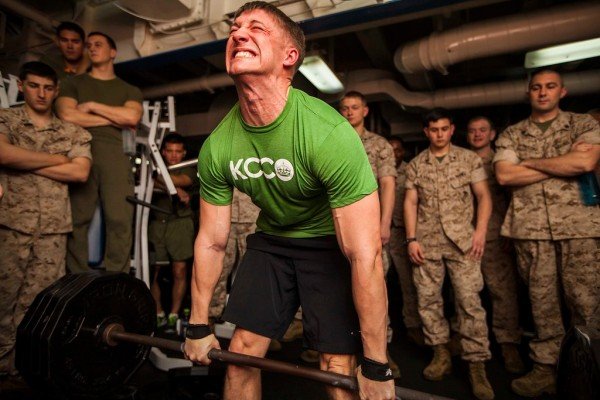 In fact, this isn’t the first time these two have teamed up to do a fitness challenge.

Two weeks earlier, they had published their first video trying to beat the US Army Fitness test without any prior training. This video shot to 1.4 million views in just two weeks.

In fact, Matt had promised that if the Army Fitness video would get 30K likes on YouTube, the duo would do the Marine Corps Fitness challenge too.

September 2019 UPDATE: Since their last video on facing the US Marine Corps Fitness Test achieved 40K likes, Matt and Mike fulfilled their promise of doing the most recommended fitness test – US Navy Seals Fitness Test.

Who Are These Guys (Matt And Mike)?

Both Matt and Mike are professional bodybuilders and fitness experts.

They each have their own YouTube channels with over 700K subscribers each. This is in addition to their websites and personalized coaching that’s available for their members.

Matt was a triple jumper who represented England internationally but his athletic career stalled after a back injury. He then jumped into his passion for bodybuilding and getting bigger.

Eventually, Matt established himself as a great fitness coach and a successful YouTuber.

Mike fell in love with bodybuilding as a teenager in high school. However, a poor diet in college stopped him from jumping into the fitness industry seriously.

After coming back from Spain, he got a job as a retail store manager but realized his lack of passion for the job. So, in 2013, he started a health and fitness company and started his YouTube channel soon after. 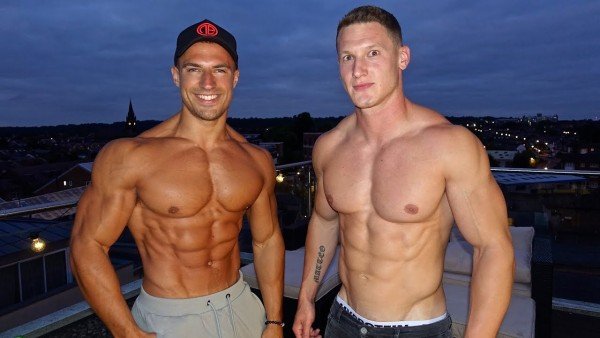 The US Army Fitness Test:

The US Army’s Basic Training Physical Fitness Test consists of three events that measure your cardiovascular endurance and physical strength.

In fact, to even graduate boot camp, all recruits (regardless of age or gender) have to pass this test. 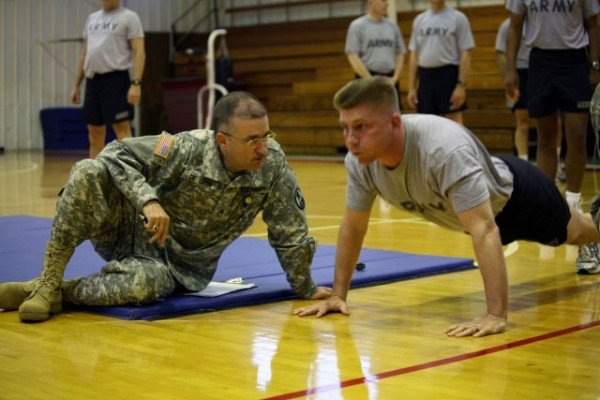 The three events of the US Army Physical Fitness Test include:

Each of these events is evaluated, and a score out of 100 per event is assigned based on the performance. The final score is out of 300, and a score of 150 is considered a pass, provided you get at least 50 points in every event.

Based on the age and gender for Matt and Mike, here are the acceptable performance parameters:

According to an article published in 2018, by October 2020, a new Army Physical Fitness Test will be implemented. This new test will measure muscle strength, endurance, power, flexibility, speed, agility, coordination, balance, cardiovascular endurance, and reaction time.

How Did Matt And Mike Do On The US Army Fitness Test?

While Matt and Mike did do the required to graduate boot camp, they didn’t specially train for this.

In the end, here were the results of the duo taking on the US Army’s Basic Training Physical Fitness Test:

In the end, Mike ended up failing the test because he couldn’t complete the necessary number of sit-ups within 2 minutes.

The US Marine Corps Fitness Test:

The US Marine Corps Physical Fitness Test consists of three events that are designed to test your state of combat readiness.

This is a test that’s carried out twice a year where every active marine, regardless of age or gender, is required to pass. 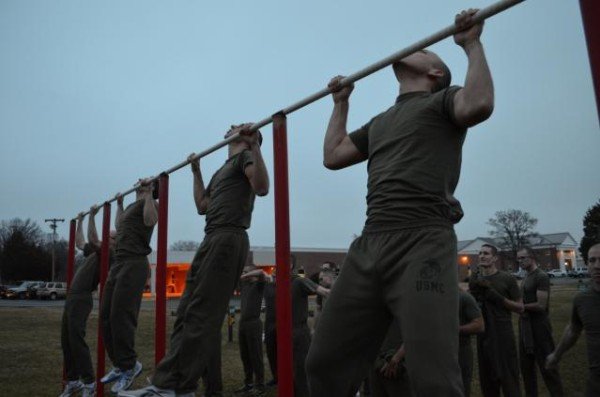 The three events of the US Marine Corps Physical Fitness Test include:

Marines have a choice between pull-ups and push-ups. However, doing push-ups will limit the maximum score for the event to 70 instead of 100 with the pull-ups.

Like the Army Fitness Test, the maximum score is 300 with each event providing a max of 100 points. The minimum score in any event required to pass is also 50.

For Matt and Mike, the acceptable performance parameters for the Marine Corps Fitness Test:

A well-known Marines mantra is ‘Exceeding the standard IS the standard.’ So, it is of no surprise that the standards to pass the Marine Corps Fitness Test are even higher in 2019 than they were in previous years.

Additionally, by January 1, 2020, Marines will be able to choose between crunches and the plank pose for the second event.

How Did Matt And Mike Do On The Marine Corps Fitness Test?

Same like the US Army Fitness Test, Matt and Mike didn’t specially train for the .

The scores they achieved after completing the Marine Corps Fitness Test:

The results indicate that Matt managed to pass with a 195 out of 300 while Mike, once again, ended up failing.

Why Did Both Bodybuilders Struggle With The Fitness Tests?

Looking at the physiques of both Matt and Mike, it’s clear they are in top physical condition. But even they failed to deliver any respectable results.

While it’s true that Matt was able to pass both the Army and Marines fitness tests, his results were mediocre.

On the other hand, Mike didn’t even pass.

This result may look surprising to some, but it is understandable when looking at how bodybuilders and soldiers train.

How Do Soldiers Train Differently To Bodybuilders?

I read up a lot about how Marines and other soldiers train in comparison to bodybuilding.

The biggest difference between the two is the goal they are trying to achieve.

A bodybuilder is looking to improve muscle size or definition. This is focused on the aesthetics of the human body.

In comparison, Marines are trained and drilled for performance under pressure. They are focused on achieving their missions instead of worrying about their physiques.

This is why soldiers are often lean while bodybuilders are bulkier.

In the end, even the fittest bodybuilder may not be able to compete with an average marine when it comes to basic physical fitness.

That said, if you compare the two on physical aesthetics, the bodybuilders are sure to win hands down.

This is why it is understandable why Mike ended up failing the Marine Corps Fitness Test.

Should You Consider Trying To Train Like A Marine? 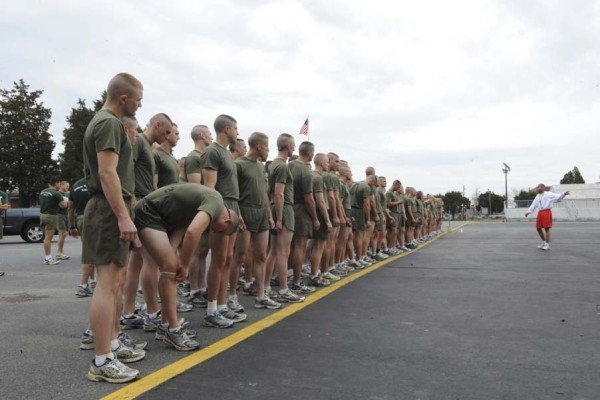 While the intense training required to be a Marine is blood-pumping, it isn’t for everyone.

Additionally, if you are simply trying to get a better-looking physique, bodybuilding might be for you.

However, for those who want to have the physical performance of a soldier, training like a Marine should be considered.

As for Matt and Mike, they have made another promise on their Marine Corps Fitness Test video.

Matt says that if the video gets 40K likes, the duo will do the most popular fitness challenge in the comments section of the video.

Sep 2019 Update: Matt And Mike Do The US Navy Seals Fitness Test

Since their Marine Corps Fitness Test got 40 K likes, Matt and Mike set out to do the US Navy Seals Fitness Test.

The three events of the US Navy Seals Physical Fitness Test include:

Like the previous two tests, there is a minimum and a perfect score for this test as well:

While the Marine Corps and Army Fitness Tests were difficult, this new challenge looked to be on a whole new level.

The scores they achieved after completing the US Navy Seals Fitness Test:

By the end of the test, both Matt and Mike were in so much pain that Mike ended up quitting the swim half-way and Matt showed signs of hypothermia.

These guys failed so badly that they didn’t even bother with calculating their scores.

However, to top this Navy Seals challenge, Matt has once again promised that if this video gets 50K likes, he will do another fitness challenge.

So, stay tuned for their next YouTube video and find out if they can manage to survive their next fitness challenge.

Want To Take Your BodyBuilding Efforts To Next Level? Check out Crazy Bulk Legal Steroids.